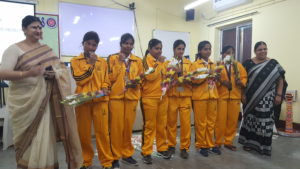 Project Sukanya is the dream project of the  Hon’ble Chief Minister of West Bengal, Dr. Mamata  Banerjee in order to provide self defence training to girl students of schools and colleges. It was  initiated in 2014 by the Kolkata Police in collaboration with the Women Development and Social Welfare Department.The main objective of this programme is to use their talent not only for their own protection but for the welfare of others as well. In Deshbandhu College for Girls Sukanya kick Boxing was introduced in 2016 under the enormous inspiration of The Principal, Dr. Anita Chattopadhay  Gupta with the help of Sri Montu Das, founder and General Secretary of the  Kick Boxing Association of West Bengal.